"OK, auntie, but I really want to press the button — like in the movies."

"Does there have to be a countdown?"

"In which case you should do it properly. You need to count down the seconds, which is a lot slower."

"And you should start by saying 'T minus' because that's what they use for real launches."

Sucheta was regretting her decision to bring her nephew into work. Her sister had thought it might help spark Rajiv's interest in science. Sucheta had some calibration runs booked with the synchrotron, but Rajiv had shown little interest in protein structures. He was, however, excited by the facility's main building, a circular structure that housed the synchrotron, a flying saucer that had somehow parked itself discreetly in the English countryside. Its medical and materials science applications held no interest for him, but he was very taken with the idea of the synchrotron as a particle ray gun or some kind of futuristic propulsion system.

"Shouldn't you say 'elephants'? We did plurals at school."

Sucheta's glare sent a message. Rajiv got it.

Besides being his aunt, what did she really know about children? How was she supposed to know that you shouldn't let kids have energy drinks? Her sister had never said anything, nor had any of her colleagues with children ever let slip this vital information. The countdown seemed superfluous: he was already in orbit. She certainly couldn't return him home until he'd landed.

"Rajiv, that's a stampede not a countdown!"

"Auntie, I have the best elephants! They are fast."

"Let's take turns. You take the numbers, I'll herd the elephants. And let's start from five." She did not believe his anticipation could be contained for a whole ten seconds.

Now she could start calibrating. About an hour since the drink? Probably another hour to go.

"Tracking Elephants" was published online with Flash-Fiction South West and then included in the Kissing Frankenstein & Other Stories anthology. More background here and here.

"I wish to buy lucky pants. Girl I chat in bar yesterday say 'no' when I ask… you know. She laugh and say Dmitri not wearing lucky pants. I did not know. Is shame, very shame."

Her smile straightened out, paused a moment in thought… and revived, a little sharper, a little less professional.

"Could you take these and show them to him?"

She took a pair of knickers down from the display and wrote on them: "Mmm, thanks Dmitri. I got lucky. Love, Tina."


"Lucky Pants" was first published online with Flash-Fiction South West and then included in the Kissing Frankenstein & Other Stories anthology. More background here and here.

Short Story: Remembrance of Things Past

It has been years since I last made this journey. I am slower and more easily tired. My footfall is not as sure as it used to be, but nor is it as bitter, as sad, as resigned.

Up the slope, near the edge of the rock, the crowd has gathered. They stand along the ridge, waiting without conversation, silhouetted against the late-afternoon sky. I am joining them.

The ground is dusty, sandy with scraps of sun-browned grass, like the dunes before a beach.

Taken two months before today, the now faded photo on my desk records our last family visit to the beach. Madeleine looking out from beneath the sunshade of her hand, her light smile overseeing the girls. Nell in her purple star sunglasses and pink flower hat, her mouth drawn in shadow — a preview of adolescence between the giggles and play. Where Nell's sandcastles are numerous, ordered and well-formed, Cathleen's are few and careless. Squinting and sunburnt, her sunglasses and hat wilfully thrown aside, she beams a big camera smile, all teeth and gaps.

Perfect in so many ways, imperfect in so many others. The eyes are hidden. I imagine I remember their glint and colour, but I check other photos to be sure. I recall the sound of sea, but can I recall the sounds of that shoreline, those waves, on that day? Voices are easier. I can recall the mutter of idle nothings and words of comfort, although the words themselves are gone. And where, where are the smells? Of sea, of suncream, of Maddie's hair. Smells hide in memory, found only with a map that is also the key that is also the trigger. Perfectly locked, perfectly lost.

I reach the top of the slope, catching my breath in the still air. No ocean, only scrubland and rocks and a road. The smell is of desert.

The crowd is all gathered, all but one. Madeleine and the girls will be along soon. We will watch them pass, these different ages of me. Compelled to migrate, we return to this past as our present is marked out by anniversaries, birthdays and other remembrances.

We will watch the accident and wonder the same things. Was it the fading light? Was Maddie tired after so long behind the wheel? Were the girls squabbling, distracting her? Was there something on the road? Or perhaps a fault with the car? Was there anything we had missed? Something we could do to change the outcome, anything to alter time and replace tomorrow.

Across the crowd we each wear age differently — the haggard and the kempt, the mawkish and the resolved, the resigned and the hopeful. Chasing possibility, three scan the road with binoculars while three others pore over notebooks of lists, figures and calculations. Each looking for the overlooked. Each hoping for a contradiction to be confounded, to be unravelled to reveal an alternative.

But hope is not common among us. A few look only at the ground in front of them. Most gaze across the desert at the darkened foothills and fading mountains. I catch momentary glances and a few stares. I remember being those others looking at this older self, noting the one in the crowd of selves obviously older and frailer than the rest, none older.

The last to join the crowd is walking up the slope. There are thirty years between us. His journey is the first I made to come to this rock, to watch the accident from afar instead of attempting intervention. He sees me. He pauses, fists clenched. I remember the resentment, the feeling of being boxed by fate, of wanting to lay blame at the feet of who I am now for what I had told him — words of comfort, words of despair. He looks away and takes his place in the crowd.

The car is seen before it is heard. Everything is leading towards that moment, the moment I have seen, heard and felt so many times. I know how it plays out, how it feels.

A figure is running towards the road. His is the first time I made this journey. The technology had worked, but not with the precision I had hoped for or relied upon. I was running to recover lost time. Running to reach the road, to stop the car, to change everything.

But I was not alone. There were others running towards the road. I heard them and turned, hesitating, shocked, unable to make sense of these apparitions of myself.

I believed I had fooled causality. I had found a way to pass through the surface of the present into the past. But it was a sting.

At the last moment I look away to watch the faces of the crowd. Some look, others turn. Despair is written on the younger faces. The older ones cannot be read. The air carries and thins the cries of those running towards the road.

We each remember the phone call, the interruption before we were due to present our paper, pulled away from the conference and weekend together that Maddie and the girls had been driving across states to reach. The hotel, the departure, the hospital, the identification. Moments blurred together in an instant that took forever.

There is nothing to be done, nothing to be said. The crowd disperses. Some linger, some rush away. Out near the road they do the same. But one of them looks to the horizon rather than the ground or the wreckage. Singled out by the sunset, he catches sight of movement, of figures on a distant rocky edge.

I will wait for him.

What has happened has always happened and always will have happened. Time is like a river, but frozen not flowing. Eddies, pools and falls are fixed in place, timeless and immutable.

Closed curves in time allow my presence here and now; temporal entanglement demands it. But the logic of time loops is self-consistent and cannot be hacked.

I will take all this to my grave. This knowledge. This technology. This curse of impotence and reliving. The lid will close and my work and all the sadness it brings will be gone. The only markers will be an early paper — unpresented, obscure and seemingly little more than speculation — and the curiosity of my cancer — a novelty and a puzzle and, eventually, a memory for the doctors who gathered round and sampled and discussed.

I turn. He is coming up the slope.

I cannot remember exactly what was said, but it was words of comfort, words of despair. He walks to the edge, just along from me. He looks at the wreckage and the road. He looks at me, to me. Troubled. Uncertain. Desperate. He walks over. He wants to ask. He wants to plead. He needs to know.

I take his arm. Whatever I say will be the right thing. It will have been the same thing. Nothing can be changed. Words of comfort, words of despair. 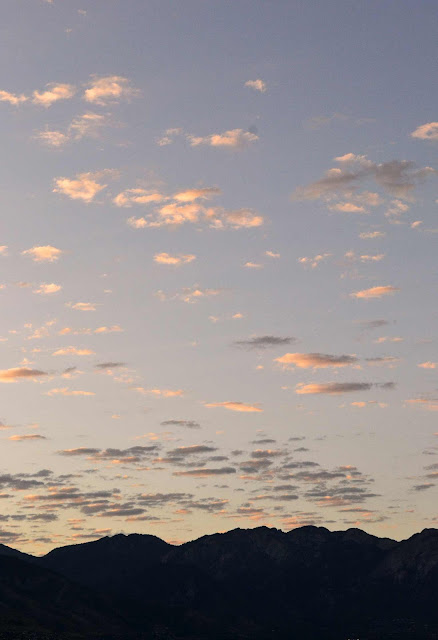 "Remembrance of Things Past" was first podcast at Litro and the text was first published at The Fabulist. I took the photo in Salt Lake City, August 2011. More background here and here.

A recent trip to Hong Kong reminded me that I hadn't matched the announcement of the translation of Pattern-Oriented Software Architecture, Volume 4: A Pattern Language of Distributed Computing into Chinese with that of its slightly younger sibling, Pattern-Oriented Software Architecture, Volume 5: On Patterns and Pattern Languages, both translated by Xiao Peng. I received my copy last month: 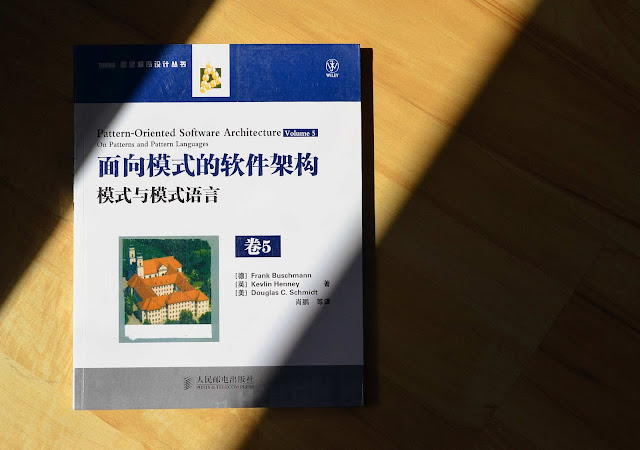 Both volumes started life in the early years of this century as a single volume to be co-authored by me and Frank Buschmann. By the time we completed the manuscripts in 2006 (September for POSA4 and December for POSA5), it had split into two tree-felling volumes and we had invited Doug Schmidt on board as co-author. Both volumes were published a month apart in 2007 (March and April, respectively), but the translations into simplified Chinese have been later and further apart.

Posted by Kevlin Henney at 14:28 No comments: