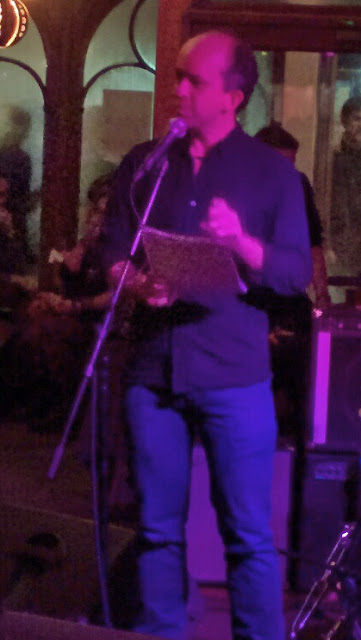 Posted by Kevlin Henney at 09:28 No comments:

January was a blog-dry month, which makes this the first blog post of the year. We are so far into February that there is clearly no pretence this post is any kind of review of 2015...

So how was 2015? 365 days long and stuffed to the gills with minutes and moments. As well as work, and the travel that goes with that, and family, and the richness and memories that go with that, it was filled with stories and happenings and more.

I rekindled an interest in photography, but via Instagram and my phone rather than competitions and my DSLR. I wrote a bit less than I would have liked, but enough that I had stories published (e.g., "A Prolonged and Postponed Preparation of Procrastination" and "Ragdolls") and republished (e.g., "A Bridge Too Far" and "Hilary Is the Winters of Keith's Discontent").

On the fiction front, then, 2015 appears not to have been that busy. But then again, perhaps that's not the whole story: I helped put on the third BristolFlash event on National Flash Fiction Day and was on the organising committee for the Bristol Festival of Literature. I appeared on Ujima Radio to promote each event, as well as a flash-writing workshop I ran at BristolCon Fringe. I went to CrimeFest, EdgeLit and BristolCon, where I was on a panel. And I did readings of my stories. Many readings.

I hadn't really thought about it until the last Sanctum appearance when, if I recall correctly, Grace Palmer noted that I'd done a lot of spoken word events in recent months. And she was right. We had both read together at five events. And I'd read at others as well.

March saw me reading at Let Me Tell You a Story, Jack. April saw me reading at Talking Tales, as did June. In June I also read on Ujima in promotion of National Flash Fiction Day and then again on the day. In July I read a lab-lit story at Science Showoff. August? I had a break.

In September I read at Novel Nights. OK, given it's my stated ambition to not write a novel — and that's going very well, thank you very much — what was I doing at Novel Nights? It was a short story special edition headlined by Tania Hershman, with me, Grace Palmer, Harriet Kline, Helen McClory (whose flight was delayed, but turned up right at the end of the evening, just in time to read!) and Pete Sutton also reading. As planned, I read out my North by Southwest story, "Like Giants". Its tale of sea, displacement and loss, written in 2014 from a more abstracted and fantastical point of view, had an unexpected and particular resonance with events in the news. And then I read at BristolCon.

October brought the Bristol Festival of Literature, where I ended up reading four stories — including two new ones — at three events: Written from Art, The Flash Slam and the Talking Tales' Speakeasy.

In search of inspiration for a new story, I visited Carol Peace's studio, where Written from Art was due to take place, a few days before the reading. What I came away with — as well as a downed coffee and a good chat with Carol — was an inevitably deeper appreciation for her sculpture than I had got from her website — an appreciation that was already deep and inspiring — plus a slight surprise. Instead of a new story, I found the missing pieces to a story that had been sitting on the shelf for a couple of years — complete in one sense, but lacking a certain something. That said, I didn't finish rewriting it with that certain something until minutes before we were due to leave the house for the event! This is as close in spoken word that I've come to my (notorious) habit of not finishing my slides for conference talks until — sometimes (only sometimes...) — minutes before I'm due to present. No, I'm not claiming it's a good habit, but it's certainly a habit and there's nothing quite like a performance deadline to bring focus to the task in hand!

The Flash Slam was hosted brilliantly by Nikesh Shukla, with readings from six local writing groups (two of them combining forces as a single team). Two main rounds spanned four readers from each team, the first round marked by Nikesh and general audience feedback and the second by volunteers in the audience. I was on the North Bristol Writers' team and read out "Authenticity".


The final round came as a surprise. Doubly so: North Bristol Writers were in it, going head to head with Bristol Novelists, and instead of using stories we had brought along just-in-case, we were handed the challenge of writing a story in the few minutes that spanned the break from the second to the final round, based on suggestions from the crowd. Nothing quite like a performance deadline to bring focus to the task in hand. Our team threw ideas around for a few minutes, then we each wrote a flash based on that, after which we regrouped, read through and selected. My story was chosen. So it was all down to me. Ulp. Except that, in truth, it wasn't: Bristol Novelists were represented by Alison Bown.

I'm going to say that the standard of readings that night was very high... but Alison's story in the main rounds was, quite frankly, the best thing I heard all night. So yeah, that's a prelude to saying: the Bristol Novelists won. A flash fiction competition. Writing is writing, good writing is good writing, great reading is great reading. But irony makes it even more fun!

The festival closed with the Speakeasy, hosted by Talking Tales, where I read "Possession". The rest of October and November was filled with Sanctum, which incidentally marks the first time I've been paid to perform a reading.

Looking to the immediate future, I'll be at Novel Nights tomorrow night: Tobias Jones is talking words and language. And I'm in Bristol. How can I resist? I'll also be reading at Talking Tales this Saturday. Somewhat further ahead, the Bristol Festival of Literature committee has whirred into life and is gathering proposals and ideas for the festival this year. Please get in touch if there's something you'd like to see or organise.

Posted by Kevlin Henney at 16:07 No comments: