I meant to write this blog post a couple of weeks ago but didn't have the chance. I now find myself at year's end — with a just-over-one-year-old blog — trying to resist the temptation of indulging in too much of a year-end review.

I started this blog with the intention of writing something about my interests, such as writing, photography and running, among other things. Most posts to date have been about writing and photography. While running has made an appearance in a couple of posts, it has always been in a supporting role and never as a lead character. Although not mentioned in this blog, one notable running achievement this year was that I ran my first half marathon. Technically I ran two halves this year: a proof-of-concept around the Downs in August and then the Bristol Half in September. Perhaps more on that and other interests next year. Perhaps.

Writing is what kicked this blog off, with my story "Starfall" chosen as runner-up in New Scientist's flash fiction competition. The last twelve months has seen a lot of writing, but one desire for the year that remains unrequited is revisiting and elaborating "Starfall" to a fuller short-story length. That goal has now been bumped into next year. On the plus side, I was fortunate enough to meet Neil Gaiman, who judged New Scientist's competition shortlist, quite by chance in Heathrow airport a few months ago. I was sitting in Giraffe, Terminal 5, when I recognised him and then went over and introduced myself. Made my day.

OK, so my attempt at resisting the temptation of a year-end review has not been entirely successful. Time to move to December 2011 and three stories of mine that were published.

First off, "Schrödinger's Pizza", a lab lit tale of pizza, beer, summer romance and quantum mechanics, was published both online and on tree with Litro: 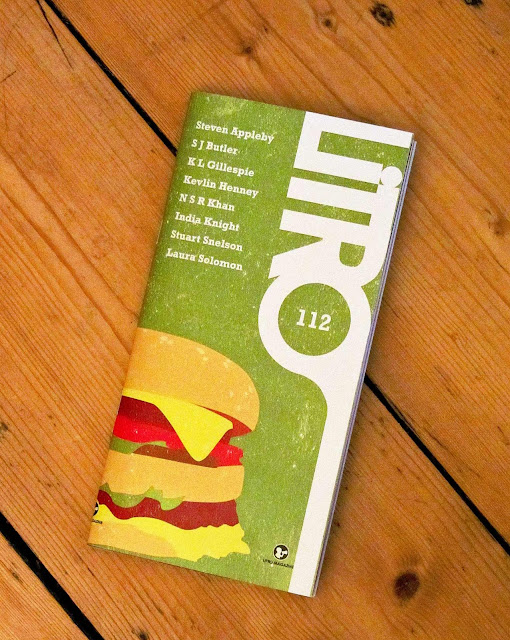 Staying with the lab lit theme, I have an entry, "Tracking Elephants", in a flash fiction contest: the Light Reading short story and flash fiction contests are designed to raise the profile of Diamond Light Source, the UK national synchrotron facility. You can find (and vote) for the story here.

The other story published this month is "Meeting over Coffee", which appears here. Not lab lit, just a flash tale of brief encounters, coffee and Catholicism. This story started life in Rosemary Dun's Writing Gym at the Bristol Folk House in November last year, where the first draft came out of an afternoon exercise. Some redrafting and rejection later it was accepted for Glossolalia... which sadly folded just before my story was due to go up. In writing, acceptances can be rare creatures, so I was delighted that the story was accepted and published by Fiction365.

Posted by Kevlin Henney at 10:08 No comments: