The love was gone. She searched all the places it had been. In the bedroom, at their favourite restaurants, among the wedding photos... she tried each one in turn, but it was nowhere to be found.

She tried to rekindle old flames, but found no more than ashes. She tried new flames. They burned passionately, brightly and briefly. Lovers loved but were not love.

She found it one morning over breakfast. Time and familiarity had misplaced it. A simple and true "I love you" served with coffee, woven discreetly into the daily routine. So easily overlooked, yet there all along.

"Your hair is the break of day, the beauty of autumn."

"Your skin is the falling of snow, but with the warmth of spring."

These were words of love, but not her mother's. That childhood was past. Her mother's kindness was buried in bitterness and time and a marriage to the brawling Bûcheron, a man Scarlet was forced to call Father but could never call Papa.

"Your eyes reflect a summer's sky with a sparkle from the North Star."

These words of love were born of passion, the love of a lover, Benjamin, her dearest B'jou.

"They are like wolves. His kith and kin are low-born forest dwellers, little more than foragers. You should be done with him. The young men of the village are finer and would court you."

These... these were her mother's words, the jealous contradictions of the woodcutter's beaten wife.

Her grandmother greeted her at the door, smiling, knowing. Holding out freshly picked flowers, Scarlet blushed. Her late morning visits on market days had become lunchtime visits. Against her mother's will, Scarlet would take the route through the woods to see her Benjamin, to stray from the path with her B'jou, before taking bread and fruit to her grandmother's cottage.

"Why your mother hates him so, calling him such feral names, I do not know. Such strong hands, such a beautiful voice, such lovely big eyes. A kind and gentle man. Not like that drunken, hateful husband of hers. With my son she was carefree and beautiful; together they were such a couple. That Bûcheron brings out the worst in her. He has made her mean and cowering."

That night her grandmother's words fell in anger from Scarlet's lips.

"Spoilt child! This wolf's lechery and your grandmother's doting affection have poisoned you against us!"

Her mother hit Scarlet, hit her and wept, hit her to protect her, hit her to prevent the woodcutter doing the same. He went to grab Scarlet by the hair, he moved to strike her, but looking her in the eye, he spat and left, disappearing into a darker night to drink.

He returned in the morning bringing with him a twofold tale of sorrow. Scarlet collapsed and cried, but through her grief her anger rose, rose and gave her strength to shout at him, to strike him, to tear into his lies with a passion born of love. He did not strike back. He had no need. The story, a story, was around the village. It was said, so they said, that Scarlet's lover, her Benjamin, her dearest B'jou, had slain her grandmother as she slept; that the woodcutter had happened upon the cottage and tracked him down, closing the circle with his axe.

Bruised and battered, diminished and forgotten, she still had hope.

She huddled with the others in the darkness, some simply neglected, some broken, others twisted beyond recognition. In the underpass of current affairs they mumbled to one another, about their hopes, about who they once were, about who they could have been and about the few — so very few — who had made it. Spotlights would sometimes scan over them, singling each one out of the darkness. Occasionally one of their number would be pulled out and thrust briefly into the media's gaze, before being thrown back into the blind spot of the public eye.

She had been born sparkling and smiling, gleaming and radiant, a beacon of hope, a symbol of change. She was held up and shown to all, paraded along the party line, praised without hesitation, promised without condition. It was all she knew.

But she began to sense there was more. There were those who doubted, those who criticised, those who spoke of others, of other promises made, promises now neglected, broken and twisted. And for the first time she noticed the darkness beyond the media's light. She saw shadows in the shadow beyond the edge of the platform. She saw the others huddled in the darkness, so many, once like her but now less, so much less.

Then came the election. They won. They cheered. This was it. They had done it. They had made it. They awaited fulfilment. All those promises. But the light flickered and drifted away. They found themselves in darkness. They found they were not alone. A few — so very few — were pulled into the distant, fickle light. Most were returned, but never as they were before.

Bruised and battered, diminished and forgotten, she still had hope. Another election was coming.

Restlessness and optimism, a desire for change, a desire for continuity, dissatisfaction and confrontation, proposal and counterproposal. She could feel the winds of rhetoric gathering, spinning, husting. A need for promises, new and old, would set the public stage and recall her to it. She would be prepared, dressed up, made over, sent out once again into the limelight, a promise renewed, repackaged and reaffirmed. She would smile and bask as she did when she was first made.


"The Promise" was first published as part of the second FlashFlood, in promotion of National Flash-Fiction Day. More background here.

National Flash-Fiction Day (Saturday 22nd June) is almost upon us. And, as promised some time ago, a couple of things are happening in Bristol, organised together with Tania Hershman, Sarah Hilary, Pauline Masurel and Deborah Rickard. There is a Facebook page for BristolFlash that you may wish to either Like or observe more dispassionately at your leisure, whichever suits you best.

At Bristol Central Library in the afternoon, Tania and Calum Kerr, director of NFFD, will be leading a workshop. Admission is free, but it would be great if you could let us know you're coming either through the Facebook event page or via the corresponding Eventbrite page. 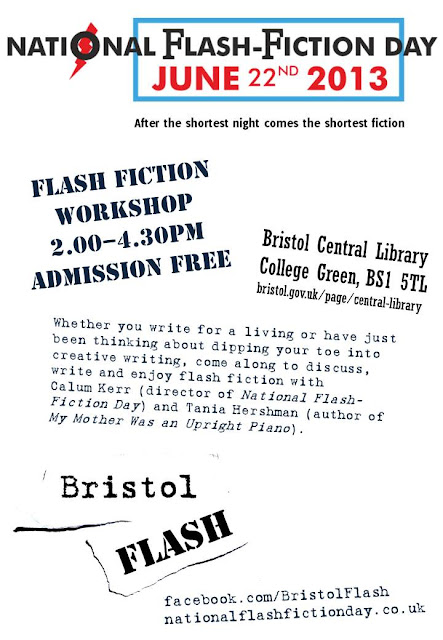 At The Lansdown in the evening, we have gathered an excellent group of writers to read you some of their finest flash. As well as the five organisers and Calum, we also have Anna Britten, Ken Elkes, Dan Holloway, Paul McVeigh, Nick Parker, Jonathan Pinnock and Clare Reddaway reading. Admission is £2 on the door. If you're planning to attend please let us know via either Facebook or Eventbrite. 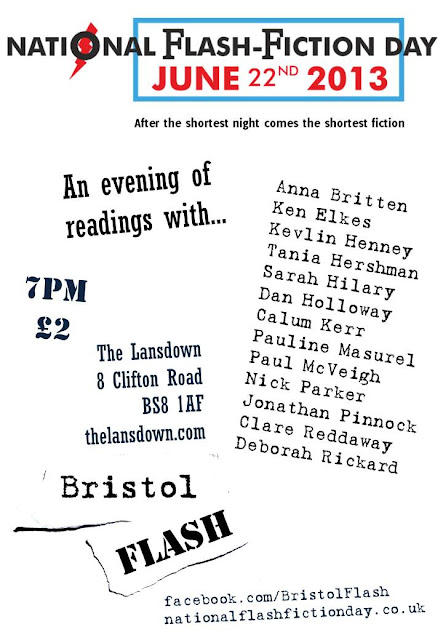 Hope to see you then!

Posted by Kevlin Henney at 10:34 No comments: