I am not yet grown up, but childhood ended the day you, Dad and Allie left me. Why did you leave? Childhood's glow has left no more than a lonely shade. I have barely enough to hold on to.

Every day I miss you. But it is not a still sadness. I turn to blame. Blame turns to anger, to rage, to exhaustion, to self-pity... then once more to blame. Always with bitterness. Always with love. I miss you.

The years since have been defined only by the accident. An existence forever looking at the present from the past.

I can still see you in those last moments, moments I could not understand. The car became an event. The white noise and gentle movement of steady travel replaced by tumbling and suddenness, glass and metal, over and around, violence and screaming.

I can still see you in those last moments, just as clearly as I can see you now. In your wheelchair, hunched over my bed, holding my blanket. Panda, Bear, Lion... years of tears have left their mark on toys named for simpler times. My room has changed little. Tidier. Frozen. Waiting. The rest of the house has moved on — messy, living and restless.

It's the middle of the night. I can see Dad asleep across the hallway. He still walks with a limp, but he can walk and he has found a way to sleep. Allie is still out, who knows where. It's how she seems to sleep.

Every night you're in my room. Little more than a streetlight's glow through undrawn curtains keeps you company. I don't understand why you're there, why you cry. I didn't leave you, you left me. What are you holding on to?

"Hold me."
I wrapped my arms around her, her and the bump, the house still shaking from the distant airburst. That had been London.
In May our group in Oxford received confirmation from the La Palma observatory. Not only was our working theory a good fit for observations, it was the best fit. The excitement swept through everyone at the centre. Our group's work was the next and final step in understanding the forces of our universe. History would record us following and furthering the steps of Leibniz, Poincaré and others.
Leibniz's calculus and laws of gravity and motion described the epicyclic motion of the planets around the Earth and the simpler movement of the Sun and Moon. Poincaré's theory of luminiferous relativity gave space substance, something through which light could wave. His theory of rotational relativity explained the movement of all the worlds. All the worlds, but not the motionless stars. A century after his work we determined that stars remain fixed by maintaining an equilibrium, not because they are fixed in some firmament. The force of their light and their attraction to one another balances the pull of Earth.
A slight buzz of champagne and talk of future work and Nobels kept me later than usual. I arrived home to be greeted by more good news and, for me at least, another celebratory glass. A day to remember.
That was May. A lot can happen in six months. Cosmology rarely graces the headlines. The universe is a simple and ordered place. Where is the news? More detailed work on the observations began to suggest otherwise, with implications both disturbing and newsworthy. Headlines soon rebranded the Centre for Cosmological Studies as the Chicken Licken Lab. The mocking humour fell silent when the constellations started to drift and fade.
Stars have dimmed and fallen before. But, as history tells, these comets are occasional and exceptional. The thousands of other stars remain unperturbed. But stars cannot burn forever. It seems their natural lifetime is around six thousand years. And now they are falling, together.
The house shakes.
"Hold me."
"Starfall" was a runner-up in New Scientist's Flash Fiction 2010 Competition. More background here.
Posted by Kevlin Henney at 17:55 2 comments:

Over the last few weeks it seems that some of my efforts have paid off: I came third in a quarterly flash fiction competition, had a reading of a story of mine go up on the site of a literary magazine and had a photo of mine selected for the runner-up gallery in a monthly competition. My blog writing has some catching up to do, so here's the backstory on all these.

Although the word limit for the competition is 500 words, the flash fiction piece I submitted, "Afterglow", just scrapes past 350 words. This is about the right length: any longer and the twist would seem either too laboured or too cheap, where it is intended simply to be a shift of awareness, and the connection and contrasts between the beginning and end would seem too disconnected. That said, it took no small amount of rumination and rewriting to get those 350 words! Reflecting an obvious bias towards poetry, Samuel Taylor Coleridge considered "prose = words in their best order; poetry = the best words in their best order". Why prose should not involve the best words is not obvious to me, but the definition of poetry seems to fit much short fiction, particularly the constraints of flash fiction.

The first draft of "Afterglow" was written on a long-haul flight after I had woken and most other passengers were still asleep. It's the kind of isolation writing sometimes needs. But the draft had a longer journey ahead of it than the flight. Many revisions and a couple of rejections later it managed to land in third place in FlashStories.net January 2011 competition, the results for which were announced in April. This also marks the first time I have actually been paid for fiction.

Because the competition site keeps stories online only for the quarter following the competition result, I will repost the story on this blog (along with other flash fiction of mine that gets published online).

For April, Litro Magazine had the theme of science. I'd had a particular story idea kicking around for well over a year that would fit the bill (based on the Novikov self-consistency conjecture, if you are interested in the actual sciency bit), but had been struggling with the point of view from which the story should be told. The focus of the story is not on a particular technology or the detail of the science but on the consequences for a particular character. Given that the story involves only a single person directly, it might seem a little odd to struggle with point of view... but you can find out why there were other points of view to consider by listening for yourself: "Remembrance of Things Past" was accepted in spoken form for the site.

The actual writing was done over two days — to be precise, two of the days I was at a conference where I was both speaking and hosting a track, as well as dealing with some other work. I'm not going to recommend that kind of overstuffed schedule as either a necessary or sufficient way to get writing done, but I have to say it lent a certain focus! As the saying has it, "if you want something done, ask a busy person".

My Ricoh R10 has had a mark on its scanner for a few months, which has led to somewhat careful framing and cropping of shots (and no small number of retakes and expletives). Camera repairs seem to take an age, so I've been reluctant to send it in for repair without a decent backup. I have switched from a Nokia N97 to a Nexus S, which means I now have a smart phone that is smart and pleasurable to use as a phone but cannot be considered a substitute for a compact camera. Both convenience and quality matter. After buying a Nikon D3100 I have finally relented and the Ricoh is in for repair. Walking around with a DSLR is somewhat less discreet and significantly less convenient, but the obvious advantage is control and picture quality.

I was in Oslo last week and would normally have taken my compact with me. As that was not an option, the Nikon came along instead. The weather was excellent and the skies were clear, so one morning after a run I went back to my room to fetch my camera for a walk, during which I took the following: 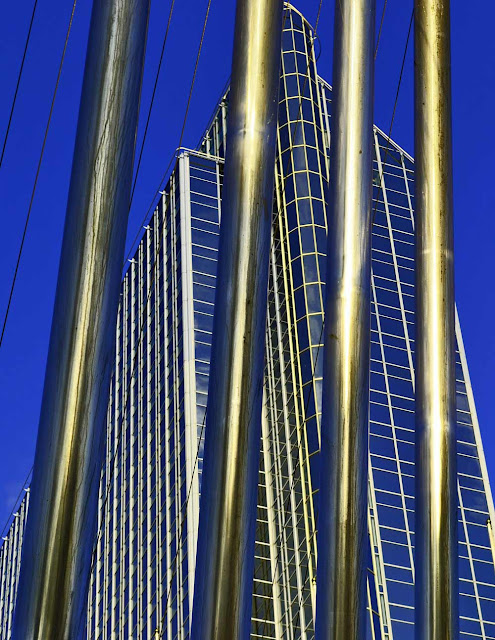 This shot is of the Radisson Blu Plaza hotel, the tallest building in Oslo (in fact, the tallest building in Norway), seen through the steel supports of a sculpture next to a flyover and pedestrian underpass. The image is cropped, colour corrected and equalised. I submitted it to the monthly themed competition at Karl Taylor Photography, April's theme being Angles. I've submitted pictures to this site before, but this is the first time I've made the gallery of the top 25 photos.
Posted by Kevlin Henney at 09:22 No comments: