A couple of years ago a friend commented on one of my photos: "Nice composition, but it would have been so much better if you'd had a proper camera. A DSLR would have captured the light on the water so much better."

He knows his stuff and has the kit and shots to back it up. But in this case he was wrong. "Do you know what this picture would look like if I'd had a DSLR? Blank. Nothing but black pixels. The picture wouldn't exist, because I wouldn't have been carrying the camera."

I had caught a moment by virtue of having a phone to hand — to be precise, in the pocket of my shorts. It was simply not a situation in which I would have been carrying a larger and more serious camera, even if I had had one. Convenience and opportunity has meant that quality of camera has influenced my choice of phone in recent years perhaps more than anything else — which is why I can be found cursing Nokia when I actually try to use one of their devices as a phone. You perhaps don't get the best shot possible, but you get a shot and it is likely to be a better snap than you'd get with other smart phones.

Recognising that I wanted better shots and more control, while still retaining the right form and factors to harvest serendipity, I decided to get a new compact camera last year. My previous compact, a Sony DSC-T50, was stolen. I was unimpressed enough with it to not bother with a replacement at the time, finding that my phone was more likely to be to hand and often took a good-enough picture. For a while at least. My inclination and interests shifted last year. Good enough needed to be better. Recommendation and investigation led me to the Ricoh R10, which seems to have the virtue of not trying to be a compact for everyone. Good optics, good resolution, good response and good control at a good price.

The challenge has been to acquire a habit of taking it with me wherever I might take a phone. And, indeed, to places where I wouldn't take a phone. Although a long way short of Gollum's attachment to the ring, I'm remembering more often than not. Earlier this week I took the following picture on the Downs, where I normally run: 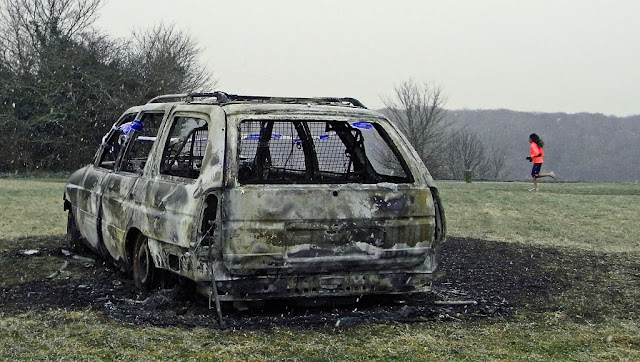 I carry neither camera nor phone on me when I'm running, so getting into a habit of taking either one in the car up to the Downs has been, well, uphill. I've missed a number of great opportunities — from sunrises to sunsets, from criss-crossed contrails to caravanserai of newly mums jogging with their buggies. As I approached the burnt-out car I was delighted that I had remembered my camera — someone else's loss was at least not a lost photo op. I further couldn't believe my luck when it then started snowing. The motivation to return to the car with my camera before the snow stopped sped me a faster than usual lap time.
I also had the good fortune to remember my camera when I went running on Boxing Day. Early and icy meant a shroud of snow mist and a dearth of joggers. And the following shot: 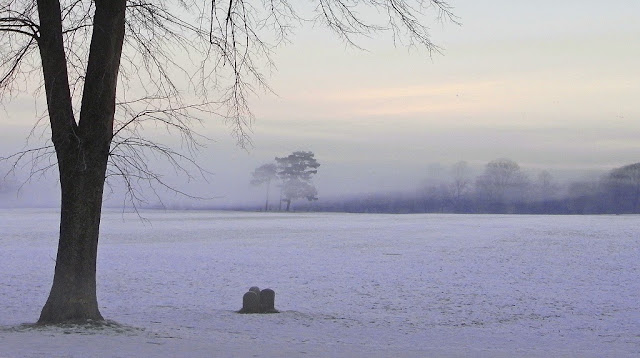 Of course, opportunity is not just about remembering to take the camera for a run: take it shopping as well. Stopped at traffic lights, en route to Cabot Circus and Christmas consumerism, I caught the following moment: 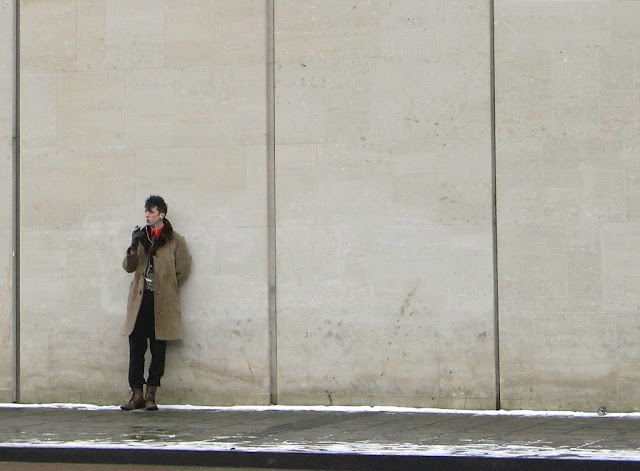 These pics with the Ricoh R10 then? I'll have to look into that myself.

Yes, these pictures and the ones used for the Orton images, as well as the current background image for the blog, were all taken with my R10.

As it's related, here is some interesting discussion concerning the quality of pictures taken with my N97.

In spite of this positive feedback, my resolve to update to an Android phone is unshaken!