Some blog with a regularity you can set your clock by. Some blog so frequently you wonder when they get time to eat, sleep or do anything worth blogging about. Some bloggers are in both camps. Looking back over nearly three years of this blog — and the two-month gap since my last post — it's clear I am in neither. (That said, this blog has sustained better continuity than one of my technical blogs, which enjoyed a hiatus of almost eight years between one post and the next.)

Although I posted something here last month, it doesn't count as a post written by me — it was a guest post on Calum Kerr's blog tour, where the only writing technique I employed was copy-and-paste. That's not say I didn't blog last month, but what I wrote was posted here rather than here.

Which is a good place to start. That post — "Shipshape and Bristol Flashing" — describes some of the behind-the-scenes and what-happened-on-the-day for National Flash-Fiction Day 2013 in Bristol. For my own reading slot I opted for four very short flashes — "Another Coffee", "A Higher Calling", "Lost Love's Labours" and "Wrecked" — rather than a single, longer piece. You can see more on the BristolFlash Facebook page.

Coinciding with NFFD was a FlashFlood, which featured my drabble "Trashed", and the results of the British Fantasy Society flash fiction competition, in which a story of mine made the shortlist. Still keeping it short, "Ring Pull", a short rather than a short short story, made the shortlist of the Limnisa–Bluethumbnail Competition. 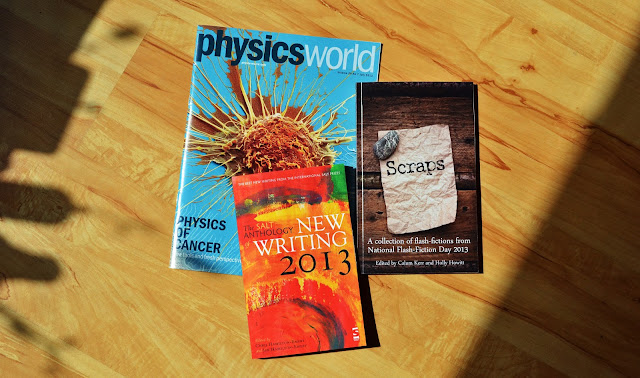 The last couple of months also saw some dead-tree story publication: my Flash 500 shortlisted story "Jack-o'-Lantern" appeared in Scraps, the NFFD anthology; "Alice2007" appeared in Physics World, a commission that grew from a conversation at April's Word of Mouth; and "A Higher Calling" appeared in The Salt Anthology of New Writing 2013. Back online, "Two Weeks in Spain" found a new audience at ReadWave.

Writing-related events are often like buses: nothing for a while, then two or three turn up together. What this usually means in practice is that I usually miss a lot because I'm away... but it's summer, which sees me more at home than away, so I managed to attend two local events this week. First, the launch of BristolCon Fringe, a monthly fixture featuring SF and Fantasy readings from local authors, kicking off with Myfanwy Rodman and Gareth L Powell. Second, I went to the Southville Writers meetup, a relaxed mix of flash readings, conversations about writing and drink.

Next time... will be sooner rather than later. Instead of looking back, I'll be looking ahead.